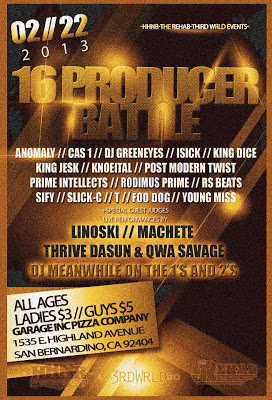 First and foremost I wanna express my respect and admiration for all of the producers involved in The Rehab's 16 Producer Battle, everyone brought heat! 16 of the illest beatmakers under one roof:

Much love to you all and respect to Architect for giving us producers the opportunity to come together like that.

It's a very stressful, crazy, scary, beautiful, joyous, thing to put your work in front of a crowd to be judged (and not knowing how they will receive something we put hours of blood sweat and tears into). I also appreciate the judges, Rob G, Dr. Knox, and Audio King,  showing respect to hip-hop of all different styles and offering their constructive criticism to all of us. I can't forget to show love to all of the people who came out and supported us and then stayed until the very end. Last (but certainly not least), my Royal Gambling Club Family who inspire me to keep the ball rolling... 3D Beats, Socal Sinatra, Lance Couper, The New Danger, Nasty Nativ, and my strongest supporter Lori Ann.

It's nights like last night that solidify the bonds between us like-minded artists and lay the foundation for a strong Inland Empire hip-hop scene. I look forward to continuing in the spirit of last night and working with everyone in the future. Fux wit a King. Yahtzee!